OK, I am in fact still in the process of getting Wildcat out (give me a break – I’ve not done this before!), so thought I’d do an article on dancing to kill the time.  Probably of minority interest but I like to keep busy and some of you may like it.

Despite having been ballroom dancing up in Merthyr for most of five years now, I’d never taken an interest in doing the annual examinations (medals).  In my varied martial arts career I’ve been assessed for grade thirty-six times so far (and passed thirty-four of them so not too bad!) so I was in no hurry to be examined in what was supposed to be a relaxing hobby.  However Simon, our intrepid instructor, approached us one day and simply asked; ‘So, what dances are you doing for your medals then?’ and combined with my fiancée’s enthusiasm I realised that my time had come!

Because of our experience we were allowed to begin a couple of notches above the beginner test and had to demonstrate six dances, three Latin and three Ballroom.  Ballroom were easy enough to pick and we went for Waltz, Foxtrot and our signature dance, the Argentine Tango.  All dances I know well, am comfortable ad-libbing with and with which I have a fairly wide repertoire of moves.  So far so simple.  The Latins were another story.  Cha-cha-cha is pretty much the only Latin dance I can call myself comfortable with, and even then I tend to stick to a fairly simple routine of moves.  I conferred a bit with my partner and we plumped for Samba and Rumba for the other two, neither of which I do well but both of which I can at least do a full routine of without ballsing it up.

After promising ourselves we would practice diligently at home and of course, only really doing so in the frantic fortnight before the event, the day itself came and I was surprised at how nervous I was.  A feeling very familiar to that preceding a grading or competition went through me but I didn’t have my usual safety net to fall back on.  In the grand Karate tradition of ‘if you do it wrong, at least do it strong’, my standard backup in a martial arts grading is to just hit hard and kiai with power in the event of my mind going blank.  Simon hadn’t stated explicitly that this would be frowned upon during dance medals, but something told me it wouldn’t exactly gain me more marks.

So instead of being able to control the nerves as I normally did, I found myself much further out of my comfort zone than I’d expected.  She won’t like my saying this but my beloved partner was in an even worse state, and managed to keep it up even after mine had turned to boredom.  That’s right, dance exams aren’t just like MA competitions in that they make you nervous of going up and failing, they also share that classic trait of every competition I’ve ever been to; waiting!  Like gradings, competitions and seminars in the MA world, it seems that dancers are lamentable at time management as well and we started our examination a good two hours later than had been predicted.

A couple of our friends were called up first and the nerves came back as I counted down their dances.  We’d be on soon, and I didn’t have my backup plan or the usual comfort that if I fail, at least I’m only failing me.  This was a team effort, another thing that was outside my usual experience, and I had someone else relying on me to lead well.  After a drawn-out wait we heard our names called up and I clacked my heels loudly as I walked out onto the floor.  Truth be told I was still nervous as hell but the one skill I could bring across from my many MA gradings was that I don’t let it show when I’m feeling like that.  Inside I was a bag of nerves convinced I’d dance out of time (instant fail) or else end up tripping my partner up and twisting her ankle or something, but you can’t let that sort of thing show to an examiner.  As far as he knew I was this generation’s Fred Astaire, and I had to give that impression as I walked up.

Of course, that illusion didn’t last for long!  Don’t get me wrong, the Ballroom dances went swimmingly enough.  I managed to relax and enjoy myself as we Waltzed and Foxtrotted around the floor.  As advised we started simply with some boxes and quarter turns, then quickly moved in to some slightly flashier things like hesitations, three-steps and feathers, always making sure to include plenty of good quality basic steps (solid basics – music to any MA student’s heart!).  We were only up there for a couple of minutes for each one and I made sure to make the most of the limited time.  I got my focus going in the Tango as well and threw in plenty of fancy-looking stuff that the examiner probably wasn’t expecting us to know (we’re known for being good at that one), and all in all I was feeling that those dances were securely in the bag.

Then came the Latin ones, and the best thing I can say is at least I didn’t actually fall over.  The Cha-cha-cha went OK, even if I could almost hear Simon in my head screaming ‘small steps!’, but the other two were the definition of ‘barely passable’.  While the time had seemed to fly by for the previous dances, it seemed to drag on forever in the Latin ones, just waiting for me to make a bigger mistake.  Footwork that had seemed light and breezy in the Ballroom was suddenly clunky and awkward, though I just about managed to remember the routines (with some partner-based prompting of course).  At some point I’ll probably write another article on this altogether, but I’m never sure who has the worse deal in dancing; the man (leading) or the woman (following).  For those unfamiliar with this, here’s a brief summing up:

It’s the man’s job to keep his eye on the floor ahead, judge the space between him and the nearest wall or the next couple along, and decide which manoeuvre to do next.  You can never just decide on this at the end of the previous one of course (you’ll end up dancing out of time), so you either plan the next figure halfway through the previous one, or have a set sequence in your head, or just dance a box or something to give you time to think (and even so you have to keep an eye out for people behind you who may not be prepared for you to stop).  Now in an examination you generally have the floor to yourself but it’s still the job of the man to make all the calls as to what comes next and to always have a plan for his next step.

The woman on the other hand has less decision-making to do but has to always know what’s happening based purely on the feeling she gets from her partner.  Unless you’re dancing a set routine the woman doesn’t know what’s coming next and has to judge her every step based on intuition of what the man is attempting to lead into.  It seems to me that both roles are incredibly challenging and if I ever end up dancing with someone other than my usual partner, I always find it difficult and awkward (though maybe I just don’t practice with others as much as I should).  Anyway, a brief distraction I know but still I wonder who has the better/worse deal on this.  Answers on a postcard to Blue Peter, Television Centre…

Anyway, back to that fateful day…

After an eternity of Latin rhythms and clumsy mistakes (mostly my mistakes for the record) we were told that would be all and bowed our way off the floor, to the generous applause of our fellow dancers.  Decent lot that they are they complimented us on our good dances and tactfully refrained from saying much about the Latins beyond ‘we hated that one too’ or, ‘yours wasn’t as bad as you think’.  The feeling of relief was palpable and we were able to enjoy watching the next couple who went up and clapped as loudly as anyone when they finished their set.

We had to wait about a month for the results to come back (examiner was in Kidderminster I think), and I was surprised to find that we’d passed in both sections (though far more narrowly in Latin than in Ballroom…) and Simon even agreed that we’d done pretty well – high praise from him, though naturally he then laid into me about heel-leads in the Rumba…

Overall I have to say that I was glad to have done it.  It was a new experience that I’d thought would be little different from all my older ones and for all its differences gave me the same sense of achievement at having completed it.  As usual, the message to all martial artists (including you; Kyokushin people!) is to give ballroom dancing a go.  It helps you move with more fluidity and improves your posture, and is a nice thing to do when you’re aching too much for more press-ups tonight.  (What am I saying?  Always do more press-ups!  Just do them in-between your dances!)

This may have been duller than a footballer’s speech to most of you but I thought it an experience worth writing about and if you didn’t like it, feel free to keep it to yourself! 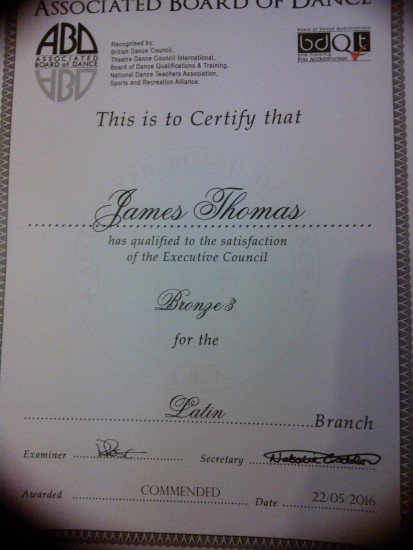 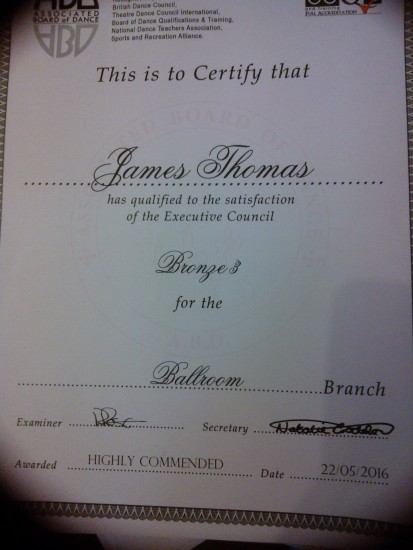 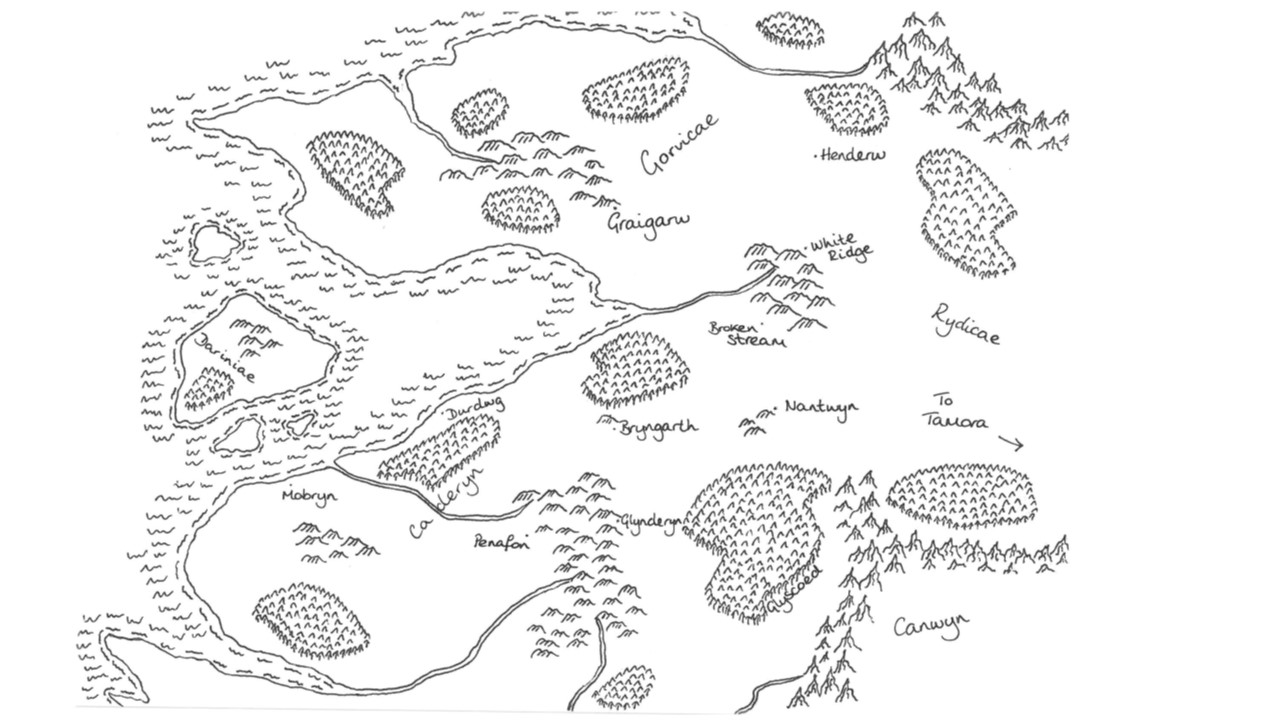