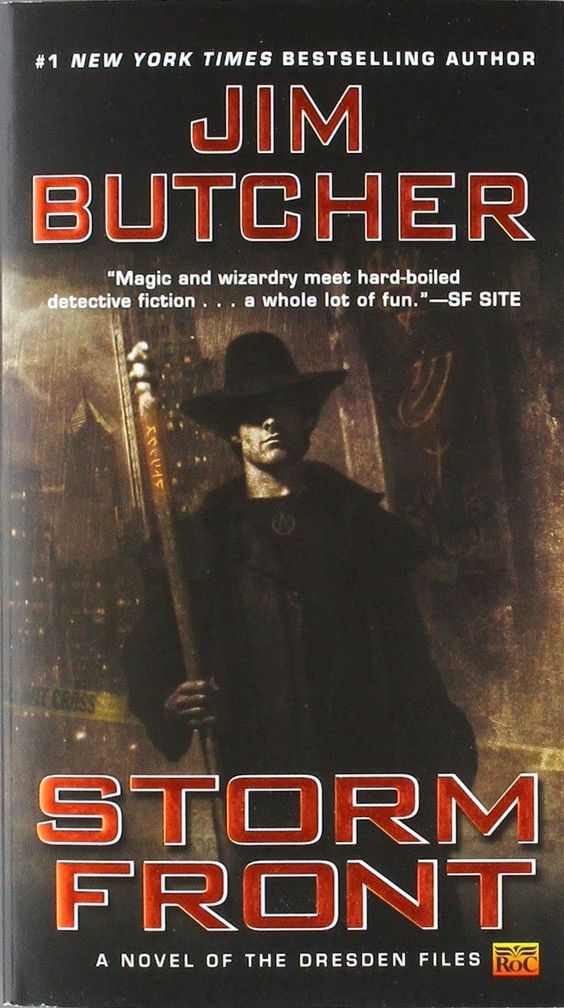 OK, gargantuan task though it is, I’m looking forward to this; re-reading the epic Dresden Files (in between all my other reading!) and writing up some reviews for anyone interested in starting what is probably Jim Butcher’s best-known series.  In case you didn’t know already I am a big fan of these books so the reviews will be fairly positive, but I’ll try to get over my instinctive geek joy and highlight flaws as well as positives.

Storm Front introduces our series protagonist Harry Dresden; the only professional wizard in the Chicago phone book.  He works as a sort of specialised private detective – no endless purses, love potions, parties or other entertainment – taking individual cases as well as working as a consultant for Lt Karen Murphy, Chicago PD.  Struggling to pay his rent, Harry soon finds himself with not one but two cases that promise to pay well; a missing husband who’s been dabbling in the occult, and a gruesome double murder for the police.  Trouble is, Harry’s cases are never simple:

A Warden of the Wizards’ White Council, assigned to keep our hero/former offender in line, is convinced that Harry himself committed the murders and is watching him like a hawk, the case of the missing husband seems to be nothing but a dead end, and the closest thing he has to a date may turn out to be an interrogation in disguise.  Harry, as we learn through the book and indeed the series, rarely has an easy or a simple time of it.

Right, that’s enough of a teaser for you, let’s get on with the review.  I’ll be honest, the most enjoyable part of this re-read to me was spotting the little things that are different from the rest of the series, indicating that JB was still working on this universe’s finer details.  Some might call that a bad thing but actually, I really liked it as it makes the author seem very human – and as a wannabe writer myself, it’s nice to see writers that you admire doing human things like that!  Of course, this is largely wasted on you if you haven’t already read this yourself so I’ll get on with a review that you might actually find interesting!

As per usual I’ll be dividing this into pros and cons.  I mention above that there are some minor inconsistencies with the other books and on a technicality, this is a fault.  Things like describing Morgan as ‘not that bright’, vampires as being ‘creatures of the Nevernever’ and Toot having a cunningly sneaky side really don’t tie in well with how we see them later.  Of course, a lot can be explained away by saying that Harry’s own perspective and understanding changes through the series, but things like how soulgazes work should really be consistent so; con on a technicality.

The second con (and again, sorry for comparing to the later books but it’s hard not to!) is that the villain isn’t all that interesting.  The character is well thought out, well-rounded and entirely believable, but lacks the appeal and charisma of JBs other great villains.  Harry Dresden might be great, but John McClain was never better than when facing Hans Gruber (ok, maybe Simon Gruber…).

I’m also not so keen on his use of magic here either, in that he seems far less confident in using it without rituals or foci.  Given that we later discover that under Ebenezer, and even more so under Justin, he became very adept at ‘thug magic’ and often describes himself as one of the top 30 odd wizards in the world in terms of raw power.  Admittedly, he justifies himself by saying he lacks fine control but we fans know from later books that he’s been extensively trained for combative magic.  It just didn’t quite work for me.

I accept that most of these cons wouldn’t have appeared had I reviewed this book after the first time I read it so they should all be taken with a hefty pinch of salt.  I can be quite judgemental about books and I clearly loved this one enough to get engrossed in the whole series.  Read it and you’ll see what I mean!

The last thing that I’ll comment on in this part can be both pro and con in its own way so I’m putting it here in the middle:  The system of magic in the Dresden Files is well thought out, thorough, and generally pretty consistent.  In a book where magic is prominent I rate all those things quite highly, especially when so many books will leave things vague so that the author can ‘magic himself out’ when he’s written himself into a corner.  While this is good, Harry’s inner monologues about it really can go on a bit, as can his constant moralising about how magic should be used.  I like that we get the full picture and it’s good character stuff to show how Harry sees his own powers, but it gets repetitive after a while and I sometimes found myself twitching for the story to get going again.

Now that’s out of the way, on to the pro section!

First and foremost, let’s take a look at Harry himself.  In short – he manages to do Spiderman far better than Peter Parker ever did.  For the non-comic fans among you, allow me to explain; Parker is a superhero whose alter-ego is exactly the kind of guy who likes to read comic books, ie geeky, awkward, smart-arse types.  I’ve never much enjoyed the Spiderman comics but I can understand how that is appealing and JB has done the same thing only so much better with Harry.  He’s a wizard and a PI but the reader can identify with him because of his personality.

Harry is a great involuntary hero in that he does what he does because of the old ‘with great power comes great responsibility’ argument.  Now that may be a fairly common idea (thanks Spiderman for making it so mainstream…) but Harry has an excellent redeeming feature in what might otherwise be considered cliché – he keeps losing fights!  I know I complained earlier about his lack of magic use but flaw though that might be, JB turns it into great character stuff.  I’m sure Nathan Fillion once said that the great thing about Harrison Ford was he was really good at getting beaten up, well the same is true of Harry.  You grow to like him the way we all like a determined underdog and the crueller JB is to his star, the more we like it when he crawls back to his feet again.

Another big plus of this book, and indeed all the Dresden Files, is the humour.  Amidst some pretty damned dramatic stuff and some things that might otherwise be depressing, JB always has time for a cheap laugh (I blew my roll and left!).  In a world of terrible things the writer knows just the right moments to lighten the atmosphere without making the whole thing into a joke.  A fine line to walk but he does it well.

There were a couple of moments that really stood out too.  I really liked how the interaction with Bianca started off like any clichéd ‘vampire succubus’ scene, and then changed into something much less sexy!  Red Court Vampires aren’t the ‘beautiful monsters’ of the Films-that-shall-not-be-named, or even ‘vaguely demonic’ as we’ve all seen on Buffy.  They are ugly, flabby, rubber-skinned, bat-faced creatures that can hide behind a mask of human-like flesh.  No ivory fangs behind ruby-red lips in this vampire den – and I loved that!

I won’t spoiler here but the bit with the scorpion is great, just because it was placed in the story so early on we forgot about it and then comes back at the worst possible moment.  There are a few other cool moments like this but of course, I’m not telling because then you wouldn’t read the book!

Were this a stand-alone novel I might have less good to say about it, but as it is it’s a great start to a great series.  I will highly recommend it to pretty much anyone and if you’re a fellow geek I can almost guarantee you’ll love it!

PS, some of you may know Mr Dresden from the TV series ‘based’ on the books.  As a man who has read the books and watched the show I can confirm what JB has said from the start:  THEY ARE NOT THE SAME THING.  He calls it a parallel world version of the stories, and I think he’s being kind.  Fact is they’ve taken the names and a couple of ideas and then written their own generic ‘supernatural detective’ series, completely ignoring everything that was unique about the characters (if I ever feel particularly vindictive after a rejection or something, I may write a review of that series…but it would just be a rant and I should probably resist the temptation…yeah, I probably shouldn’t…) 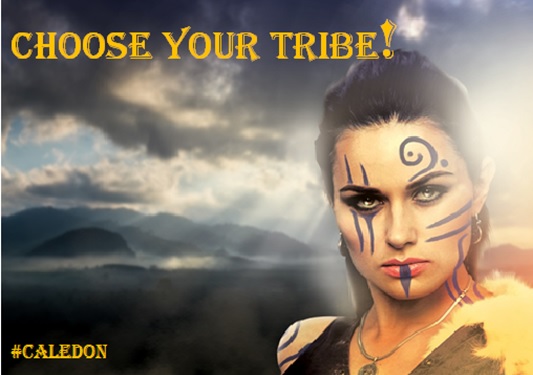