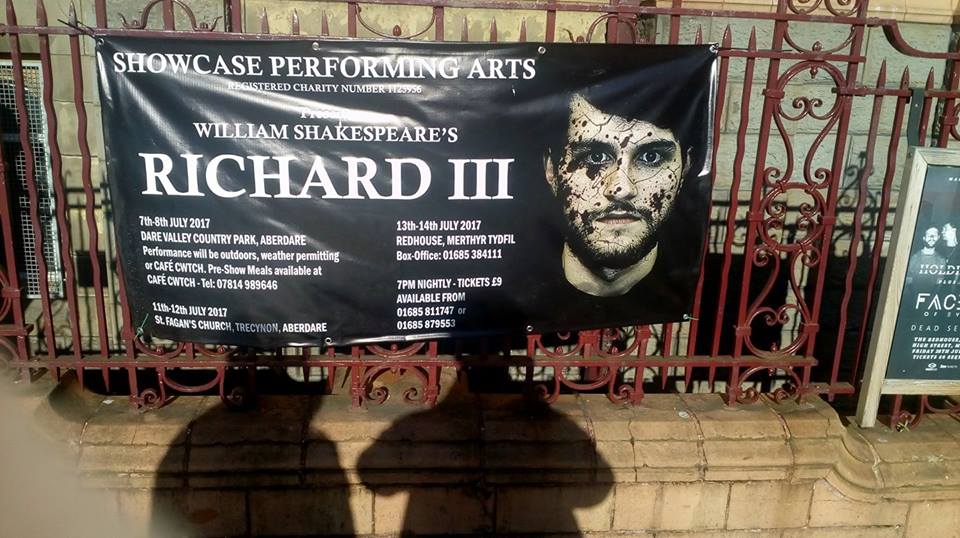 This last Friday I went to see the Showcase Sioe Gerdd, a performing arts group based in Aberdare, production of Richard III at Redhouse in Merthyr Tydfil.  It took place in a small theatre upstairs (which had the mixed blessing of being very intimate but also very warm), and apart from the inevitable complaints I made about my knee, made for a very enjoyable evening.  There were of course pros and cons and that’s what I’ll be writing about here – along with a predictable rant about Shakespeare that I’ll do my best to keep brief!

The audience was fairly modest on the night we went, but this meant we managed to get seats very near the front, and at one point I was barely five feet from a sword-wielding King Richard.  This being a performing arts group rather than a large-scale production, things like costume and sets were pretty basic but it didn’t take long to look past that.  One nice way that this weakness was turned into a strength was that the throne in the middle of the stage is there throughout the play, and is sat on by most of the principles at some point or another when they’re pondering their various fates – usually when they are powerless to do anything about them.  From memory, only Richard ever sits the throne and looks comfortable.  Nice touch there.

On to the performances; I’ll be using role names rather than actors’ names since according to the program some parts were played by different actors on different nights, and I don’t know who we saw on that night.

Firstly, I think a hat tip has to go to the valiant effort made by Queen Elizabeth, who was played by a last-minute stand-in and had to carry a book with her lines in it.  It was a distraction at times but for the most part she covered it well, making the book seem like something natural to be holding, and acted the part convincingly enough to make me feel sorry for the character (anyone who can make me sympathise with Elizabeth Woodville must be doing something right…).

Arguably the most natural acting came from Lady Anne, who I found to be brilliantly engaging right from the off.  The seduction scene (which was also the scene that got me invested in this Richard) is one of my favourites of the play and it was a delight to see it performed.  A shame, both for the actress and for the interesting character that is Anne Neville, that she didn’t have more stage time but then that’s just one more gripe with Shakespeare to add to my list!

I have to say that I found the character of Clarence to be completely overdone, with a ridiculous golden cloak, a foppish wig and a frankly silly voice, and I had no sympathy at all when he was murdered.  Strange, as I can’t really say that the actor playing him was no good, since he also played King Edward and did a fine job of it.  As Edward he was believable and sympathetic, while as Clarence he was just annoying.  I suspect that Clarence was so over-the-top to provide a contrast to the more soldierly and down-to-earth Edward, but I do feel that they went way too far and spoiled what should have been a tragic character.

The other principles of Hastings, Catesby, Queen Margaret, Lady York and especially the Duke of Buckingham all deserve honourable mentions as well for good performances, and I’d probably say something good about Richmond if he’d been on stage for more than a few minutes but once again, that’s a fault of Old Bill’s (more on that later).

On to Richard himself.  In all honesty it took me until the seduction scene to really warm to him.  The opening monologue began with a very casual delivery that was probably supposed to be feigned indifference, but just didn’t grab me the way it ought to have done, and I worried that I wasn’t going to enjoy this play since I wasn’t buying into this Richard.  However, when he began interacting with other characters he improved dramatically, with lots of sinister ‘touchy-friendly’ action first with his brother and then with Anne.  As mentioned above the seduction scene is a favourite of mine and this Richard and Anne more than did it justice.  By the time that scene was done I was invested in this Richard and continued to be invested in him up until the end.

Something I liked very much was that there was no hammed-up limp or Igor-esque hunch.  The historical Richard (and I know he was nothing like Shakespeare’s villain but bear with me here!) would not have appeared grotesque to the casual observer and his scoliosis, which he had lived with for many years, would have meant only a subtle awkwardness in his movements which is how this actor was playing the role.  A definite plus there.

One damning criticism that I can’t resist mentioning is of Shakespeare rather than of this production, and that is in the character of Richmond (as in, Henry Tudor).  No matter what version of this play you see, it’s always next to impossible to like him because he’s only introduced in the last quarter of the play and as an ‘avenging angel’ character with no depth and no real backstory either.  It just makes for an anticlimactic ending to an otherwise cracking play.

Now we all know that Richard wasn’t really as he is portrayed and we’ve all heard the cry ‘Tudor Propaganda!’ which is of course why Richmond is shown as so perfect a character.  However, I like to think that Old Bill was playing one of his sneaky tricks here.  I think Shakespeare was a closet Ricardian (and quite possibly also a closet Catholic but more of that another day!), since even though the play vilifies Richard, the character gets all the best lines and speeches, is undeniably intelligent and competent, tends to show the most charisma on stage, and it is never once denied that he fought bravely both in the previous war and at Bosworth Field.

Whereas our ‘hero’ Henry Tudor is written as a bland nonentity, whose only purpose is to give us someone to get rid of the villainous King Richard.  Shakespeare could easily have given us some scenes of him in France, or stories of his mother, and even in the previous Henry VI part 3, he’s almost an afterthought.  Why treat him so poorly, if not to show your audience that he’s actually not worth the effort?

I could go on for a while here so I’ll only make one more point on this – remember the asides like; ‘was ever a woman in this humour wooed?’?  On the surface that looks like Richard being amazed that he’s getting away with his plans, but couldn’t it equally be Shakespeare telling the audience; ‘can’t you see this is ridiculous?  Clearly history didn’t really happen this way.’  Like I say I could bang on about this for some considerable time but this is supposed to be a review of a specific play so I’ll leave it at that (for now….).

Right, now that the inevitable Shakespeare rant is done I’ll give my summing up of this particular production; there were flaws in the performance certainly, but overall I found this a highly enjoyable play with engaging performances and a suitably sinister atmosphere throughout.  If this did the rounds again I would go to see it again, and would happily recommend others to do the same. 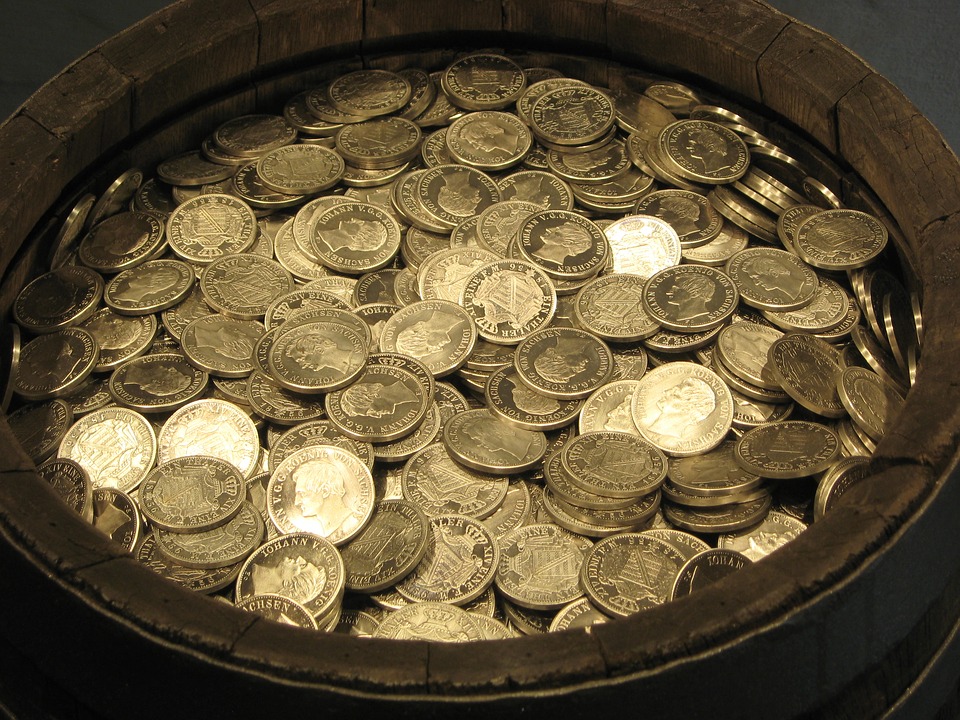