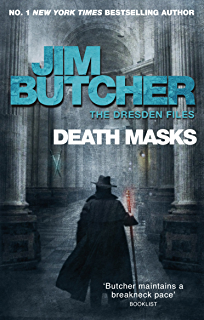 And so we begin Book Five of the Dresden series, which kicks off in classic irreverent fashion by having our wizarding hero appearing on Larry Fowler.  After the High Fantasy ending of Summer Knight, it’s an interesting contrast to suddenly see him under studio lights, trying not to hex out the TV cameras by accident.  Naturally it all goes terribly, not least because of our meeting with Duke Ortega of the Red Court.  He comes in with an offer Harry can’t really refuse, what with the war with the Red Court and all, which comes on top of his new job for the rather sceptical Father Vincent.  In true Harry style; once again it never rains!

This book sheds some more light on the Red Court and its methods but also gives us our first encounter with the Knights of the Blackened Denarius.  As villains go these are probably my favourite bunch (I don’t count Johnny Marcone as a proper ‘villain’), partly for their sheer evil-ness and partly for the sheer class that is Nicodemus Archleone.

Right, let’s get the bad stuff out of the way.  A minor thing but I don’t like that Shiro was described as wearing a gi, since it’s a little too much on the nose for me and also makes it seem like he’s dressing up for the part.  I can see where JB is going with the white clothes for battle and it’s an engaging enough image, but to me it was a step too far.  Another moment that I thought was a bit convenient was the old ‘well we’re trapped in here for the night… baw-chic-a-waw-waw; kinky time!’.  It was well-written stuff and relevant to the wider plot, but I couldn’t help but remember how he’d escaped from this exact same situation before by use of an escape potion.  I know I’ve had this rant before but some of Harry’s potions are sooooo useful that it’s madness to think that he doesn’t at least keep his lab well-stocked with the required ingredients, even if he can’t keep a supply of the potions themselves at the ready.  Now some will argue that this particular situation (I won’t give spoilers) did call for containment, but if that was the case there were other ways around it (that silver circle in the sub-basement…).

The only other flaw, if you can call it that, is that there are so many other cool characters doing cool stuff that Harry himself is almost overlooked by the reader.  He is of course still pivotal and has some great moments both character-wise and plot-wise (see one of them later!), but I found what he was doing to be a lot less memorable to what the other characters were doing.  Perhaps this was deliberate, and I wouldn’t say it lessened the story exactly, but I did get the feeling this book was a bit more of an ensemble cast.

OK, now we’re past that we can get on to the positive stuff.  This book introduces some really great characters including Shiro, Sanya, Kinkaid, Ivy, and a whole bunch of fun Denarians.  Kinkaid and Nicodemus are two of my absolute favourite characters in the series, and for the book to contain Marcone as well was just a real treat.  Nicodemus especially is well-introduced as a supervillain who just tiptoes the line between classic and cliché.  He’s calm, well-dressed, cold and ruthless as hell (I liked the description of him, when about to kill someone, saying that his face had the distracted look of a man planning out the rest of his day) but he isn’t completely passionless and is really driven in what he does.  He’s a seriously scary guy despite being the least overblown and showy of the Denarians we meet, staying sinister and understated without the reader ever losing sight of the fact that he’s the most dangerous of them all.

Ivy was interesting if slightly overshadowed by the coolness of Kinkaid, and I liked the idea of a physical embodiment of the common Dresden theme ‘knowledge is power’.  The duel was really well done as well, another insight into how the supernatural community operates, and I liked the expansion of Forthill’s character too.  The charity ball was a great scene and there is one twist especially that I really enjoyed in this book (hint; no spoiler but it includes a revelation along the lines of – ‘but if he’s clued in to this, then why…’  I shall say no more but I thought it was very cool).  Typically another favourite moment is another one I can’t share without spoiling, but it happens very near the end with a known favourite of mine and adds some real depth to the character.

Now I know I said that Harry isn’t as prominent in this book but one of the best moments of Death Masks is where we see him really getting his Bad Cop on, opening up his darker side in a way we’ve not really seen before.  We always knew he was a man with a talent for violence and a certain disregard for rules, but seeing him deal out the punishment he did was a new experience for us fans of his, and it probably says a lot about me that I enjoyed it so much.

Overall another great Dresden adventure with some fun new faces, some development of old ones, and an ending that’s easily the equal of any of the Dresden Files so far.  The climax to this book is not only exciting, with lots of detective work followed by fast-paced action, but the story ends with a cliffhanger event that makes you desperate to see what happens next!