Book four of the Caledon Saga

Elazar son of Darizar, the urbane, handsome, and charming Prince of Ushir, is building mud huts in the middle of nowhere.  And he loves it.  Lucan has welcomed him into the Caledon and, civilised bathing aside, Elazar is quite content to stay there.  This may be influenced by the wild and fair Almha, who seems to find him as intriguing as he finds her.

But trouble brews back in Ushir.  The new Gaian Emperor has a civil war to fight, and the son of King Darizar may be a valuable ally.  Or a useful hostage.  His happy life among the Caledon may soon come under threat, as games of power reach to grasp Elazar from across the sea.  But a man must love his fate, for what else can he do?

A Taste of Proud Fox 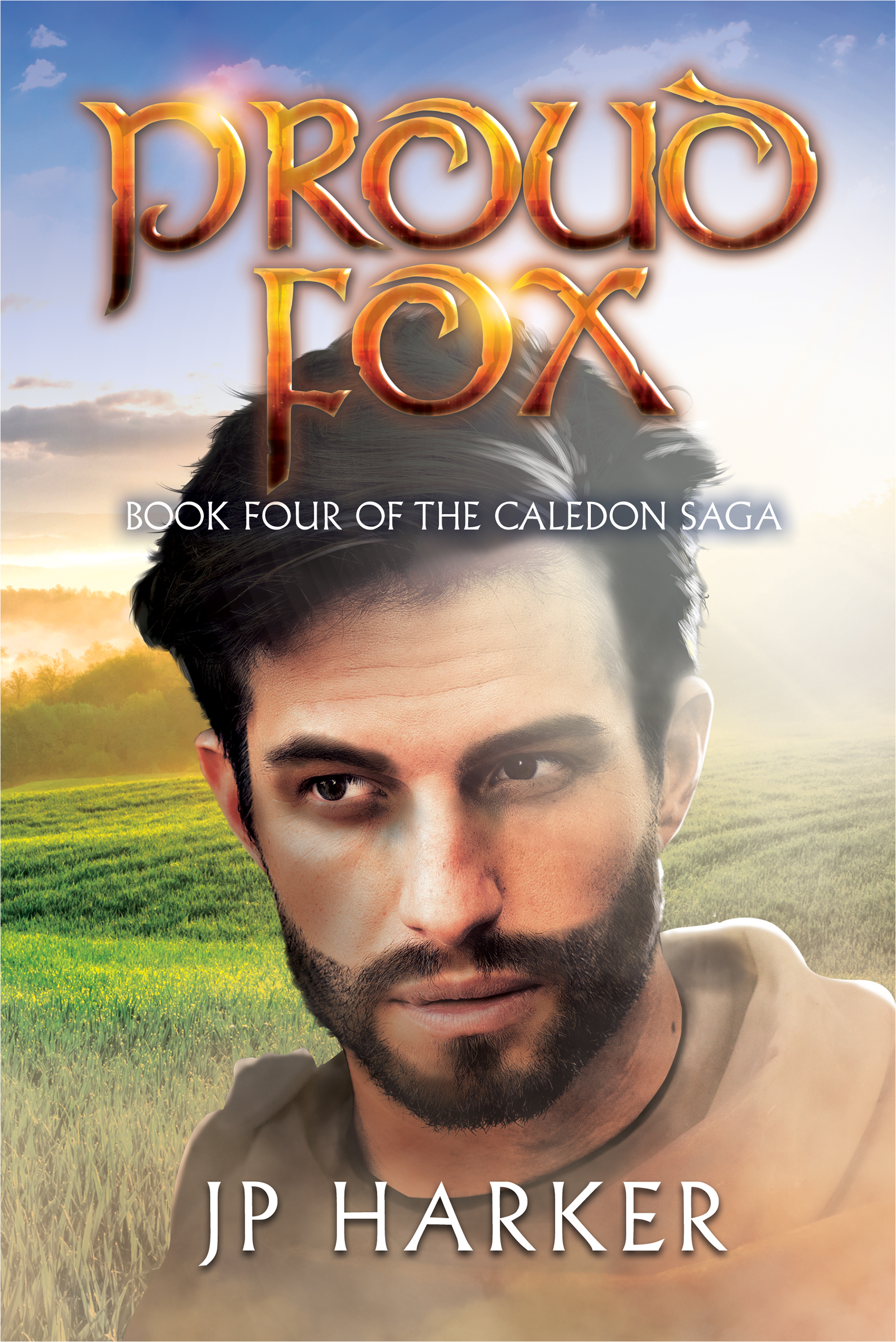 All things being equal, Elazar mused, things could be going far worse.  The Ushiran prince leaned around his shield and hacked down at an armoured shoulder, trying not to slip on the muddy grass.  The Sarrac’s mail didn’t part, but the crushing power of the iron drew a gruff cry from the raider, and when Elazar battered down at him again, the big man dropped to one knee.  Almha, keeping tight to his left, sent her boot into the Sarrac’s mouth, and blood trickled down his beard as he fell.  Elazar risked a quick glance at his comrade in the shieldwall.  Generally when he looked at Almha his thoughts drifted to things better suited to bedrooms than battlefields, but right now, with her eyes bright and her teeth bared, he was just glad he was standing beside her, not in front of her.

The tribeswoman clearly wanted to follow up and attack the downed man, but her training shone through as she held back the urge and kept her place in the Caledon wall.  Soon enough another raider leaped over the fallen man and swung a short-handled axe at Almha’s head.  The value of the wall proved itself yet again as Elazar caught the blow on his shield.  The axe glanced away and the prince stabbed low, his sword plunging through the warrior’s thigh.  Elazar tore the weapon free, and Almha barged into the Sarrac as he staggered off-balance.

The Bearnican lands had seen little enough rain of late, but what they’d had had softened the earth of the hill, and the pounding of booted feet had churned it up into a muddy mess.  The Sarrac’s feet went out from under him as the heavy shield knocked him backwards, and he careened into the man in the mailshirt, who was struggling to stand up.  The pair collapsed to the grass together.  It would have looked comical if the Sarracs hadn’t been a gang of madmen bent on theft, rape, and slaughter.  As things were, it was just another chance to hurt the vicious bastards, and Elazar called out to his company in the lilting tongue of the Lurians.

As one the line of tribesmen moved forward, their shields locked tight together.  They took three short steps, grunting in unison with each one, and shoved the milling Sarracs backwards.  When they reached the fallen raiders Elazar stamped down hard on the one man’s wounded leg, while Almha gutted the other with a quick slash of her sword.  A foul smell filled the air and both raiders cried out in pain but, to their miniscule credit, neither man called for mercy.  More Sarracs were coming at the shieldwall now, and Elazar left it to the rank behind to finish off the downed men.  He frowned at the charging raiders still in front of him.  Are they brave or just stupid to keep attacking shieldwalls like this?

Whichever it was, it was working in the Caledon’s favour.  A huge man strode towards them, a giant decked out in fur and mail, with a beard like a thornbush and an axe that looked like it could split a bull’s skull in one swing.  In anything vaguely resembling a fair fight he would have killed Elazar with ease, but he was brought down in mere seconds by the unity of the Caledon line; first Odran cracked the giant’s knee with his shield-rim, then Almha shoved him sideways as he stumbled.  It gave Elazar an opening that was almost too easy, and the prince drove his blade up between the giant’s legs.  The massive Sarrac screamed as the iron cut through his groin, and when the weapon was ripped out again, the shriek hurt Elazar’s ears.  Odran kept close to Elazar’s right as his sword crashed through the gelded man’s temple, and the prince opened his throat up the moment Odran pulled back into the wall.  They can rush us all they like, but we are the cliff that shrugs off the wave.

The Caledon were standing tight together, their shields locked, and the Sarracs either had to cram in too close to swing their long swords and axes, or spread out and end up facing two or three close-packed tribesmen apiece.  They knew this, they had to, and yet on they came regardless.  Will they never learn?  Another brave or foolish man hurled himself at them, and his weapon thudded harmlessly from Elazar’s shield a heartbeat before Almha’s blade rammed under his ribs.  Hopefully not.

For all the danger they were in, the Ushiran prince couldn’t keep his mind from wandering for a moment.  He thought back to the first time he’d fought the Sarracs, and how terrified he’d been of these feral men, enormous in their furs and stinking of ale and blood.  He’d been a mere callow youth then, standing beside his friend because it had seemed the right thing to do, and practically pissing himself each time a bearded monster came howling at him.

He was sure he’d have run away if his legs hadn’t been so weak, and what little he remembered of the Battle of Mas Arwel was a blur of fear and panic; wildly slashing at anything that moved and desperately wishing he was anywhere else in the world.  Not like today.

Elazar was no fool.  The rational fear of death and maiming was still very much with him, but today that fear was a lot easier to control.  This was a very different fight to that bloody day three harvests ago.  For a start this battle was smaller, a skirmish of barely threescore warriors per side.  For another, today he stood in a shieldwall, and the Sarracs could no more breach it than they could walk across a lake.  But more than that, more importantly than anything, was the man who was doing the fighting.  Three years ago he’d been merely Prince Elazar, the swarthy stranger in costly silks who’d come west to help his friend.  Today he was the Proud Fox, with blue woad on his face, inked battlemarks on his arm, and dragonfire burning in his gut.

He shook the thought away and braced himself as another raider came hurtling at them.  Unusually for a Sarrac this one was carrying a shield.  It was a small, poorly-made circle of red-painted wood, but all the same it was a sign that some of these savages had caught on to how useful a shield could be.  Not that the fools knew how to use them.  The raider locked eyes with Elazar and screamed as he charged, outpacing his comrades in his eagerness.

Elazar recognised the Sarracs’ name for him, which apparently translated into ‘Black Devil’.  The prince was never sure how to feel about that.  Considering his half-Gaian mother, Elazar was positively pale compared to most Ushirans, yet he was clearly the only Ushiran the mountain savages had encountered, and they all assumed that he was some kind of dark-skinned demon; something to be feared and hated in equal measure.  This did not put them off from fighting him, of course.  Quite the opposite.